There are more and more celebrities who decide to adopt children from the Third World. Is it the new whim of famous people, is it a necessity or just a sign of good will? It is praiseworthy to leave the palace and to give chance to children who live in such a different world. At least – their life will never be the same. Still, starts from Hollywood show that miracles happen even in countries which God has forgotten.

It seems that Anjelina Jolie initiated the adoptions. The actress has three adopted children. In 2002 Jolie adopted a 7-months boy from Cambodia, called Madox. During a trip of Anjelina, Brad Pitt and Madox in Ethiopia she met her second child – Zachara Marley. In 2007, the year she lost her her mother, the actress from “Lara Croft” adopted her third child. This time he was from Vietnam. The boy’s name is Pax Tien and he is three years old. Meanwhile Jolie tattoeds on her left biceps the places where her children are born. There are rumours that Anjelina is going to adopt another child – this time from the Asian country of Myanmar. That’s how one of the most desired women in the world ranks first among the Hollywood celebrities. 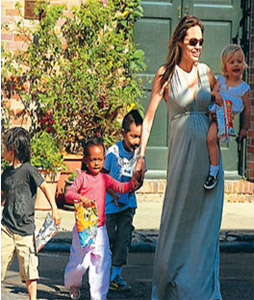 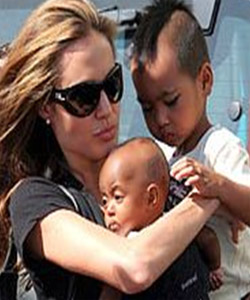 The next celebrity is Madonna herself. The pop legend has two birth children – Lurdes (from her marriage to her ex-dancer Carlos Leon and Rocco from her marriage to Guy Ritchie). In 2006 she adopted David Banda from Malawi. Because of her choice, Madonna was accused of paying to get the child. Although all the problems, Madonna is determined to adopt another child from the same country – a girl, named Mercy James. The pop icon brought fame to Malawi because of the trials about the adoption. But she promised to make all her best to help the suffering African children. Who can say if it is a PR move or not? One thing I sure – Madonna won’t stop here...

MORE PUBLICATIONS:   ISSUE 15: DISASTER! THE MARRIED LADIES REJECT THE SEX   ISSUE 14: THE SEXUAL ADDICTION   ISSUE 13: DOES FENG SHUI INFLUENCE AT THE GOOD SEX   ISSUE 12: THE SEXUAL THERAPY – A CURE FOR INTIMACY   ISSUE 11: WITH CHILDREN TO THE SEASIDE
﻿