The talented young designer Nikolay Bojilov won Bulgarian issue of the competition Triumph Inspiration Award 2010. He also took a special award from Academy for fashion - “Golden Needle 2010” before a month.

In an exclusive interview for Fashion Lifestyle Magazine he said that these awards are great stimulation for him to continue his career as a designer. Nikolay Bojilov explained that his model in the competition Triumph Inspiration Award 2010, called “Morphology”, was inspired by muscular groups of the human body and was mainly hand-made. The young designer said he admire Carl Lagerfeld because of his creativity. 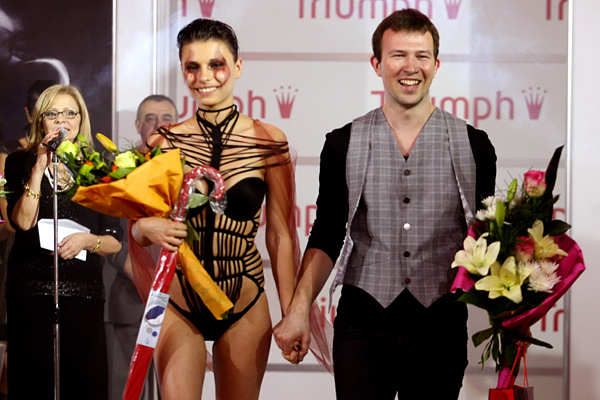 Picture:
1. The winner in Bulgarian issue of the competition Triumph Inspiration Award Nikolay Bojilov and his model “Morfology”.

MORE PUBLICATIONS:   ISSUE 28: Beyonce: always look for the balance in fashion   ISSUE 27: Evgenia Jivkova: “Black is the most fashionable colour this winter”   ISSUE 25: Jennifer Aniston: “I love simple things in life – am I boring?”   ISSUE 16: "Feel the passion, touch the colours, and choose the Rosalita McGee’s style"   ISSUE 15: JOHANN LIHER: „FLOWERS AND FASHION ARE A MIRROR OF BEAUTY”
﻿