"Trio Plachkovi" presented their unique "La Comedia" performance during a press conference at the New Theater "NDK". On the scene where the play itself is played, the Plachkov family, Alina, Stefan and their son Sasha, told and showed a selected part of their comedy physical theater. Leading the press conference was Prof. Lubomir Stoykov, who focused on body language - a major means of expression in the performance. He cites Jean-Louis Barrault's words: "The power of the gesture is to make the invisible apparent," which provoked Stefan Plachkov to reveal that "La Comedia" without having any words makes human feelings apparent. 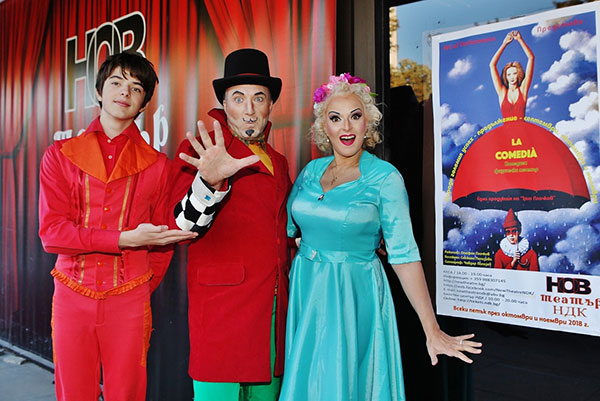 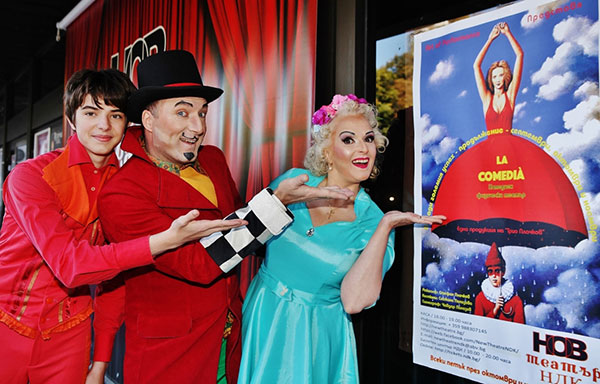 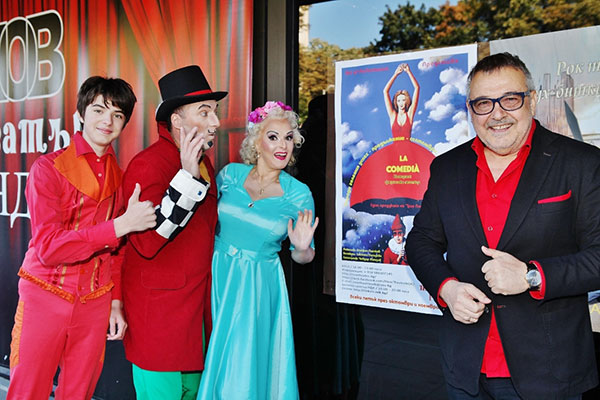 Alina Plachkova, who plays the main female role and is the director of the show, says that she sends a message of love - how important it is for a person to meet and live. Her heroine dreams of the big stage of Hollywood and fulfills her wish in her dream, and her love for the theater comes to life. Alina Plachkova has told her about her longtime friendship with Charlie Chaplin's daughter, Victoria Chaplin, who inspired the Plachkov family for the La Comedia show. It was Victoria Chaplin who gave the idea to continue the collaboration between the two families, which began 100 years ago, when George Davies, Alina's grandfather, played with Charlie Chaplin in the "The Circus" film. 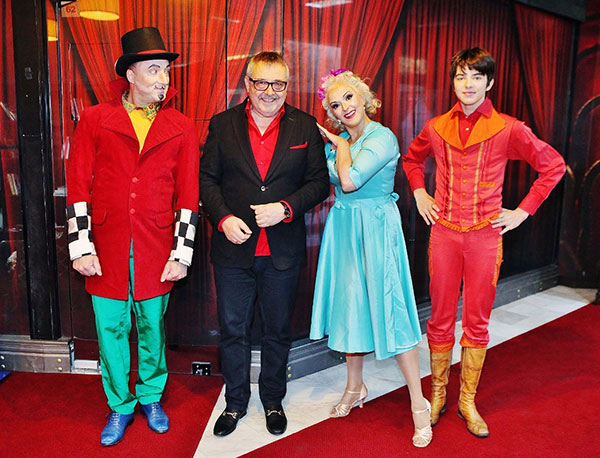 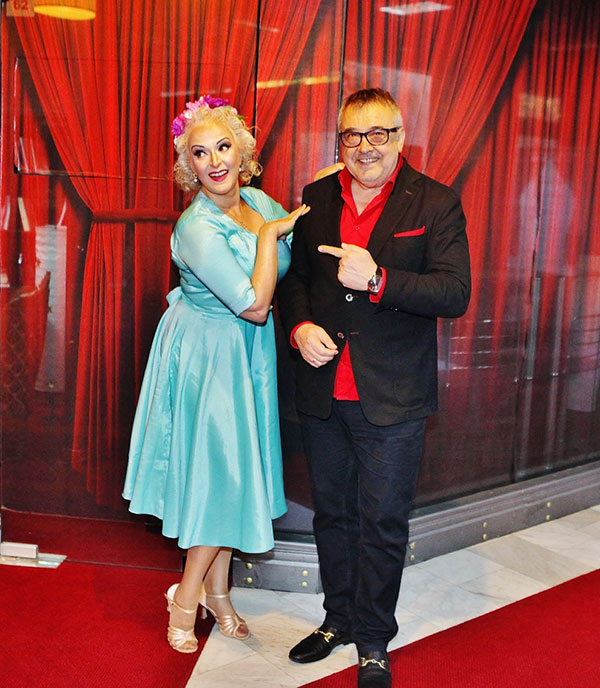 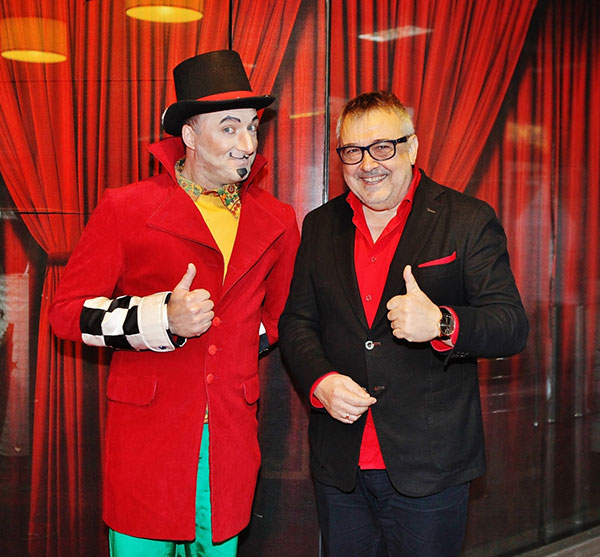 During the press conference, Alina Plachkova presented two key scenes for the show. The first one is a pantomime with a skirt-scene, in which the transformation of the heroine occurs at the very beginning and she "enters" into her dream. Alina Plachkova impressed the audience with musical juggling on the piano. Stefan Plachkov paid special attention to the fact that she is the only woman in the world to perform this unique talent. 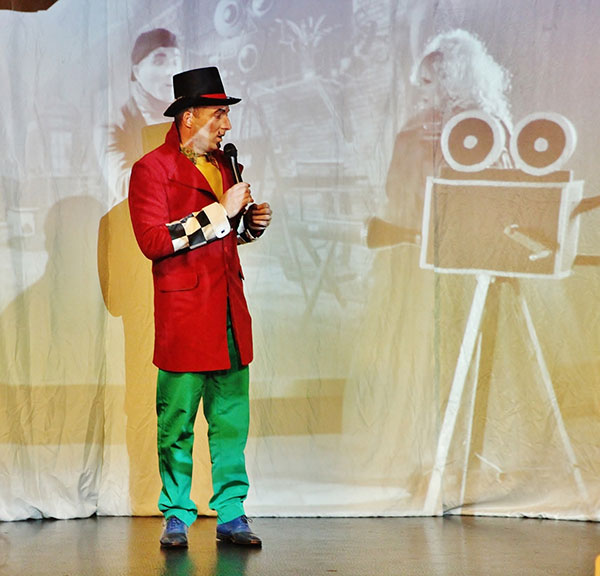 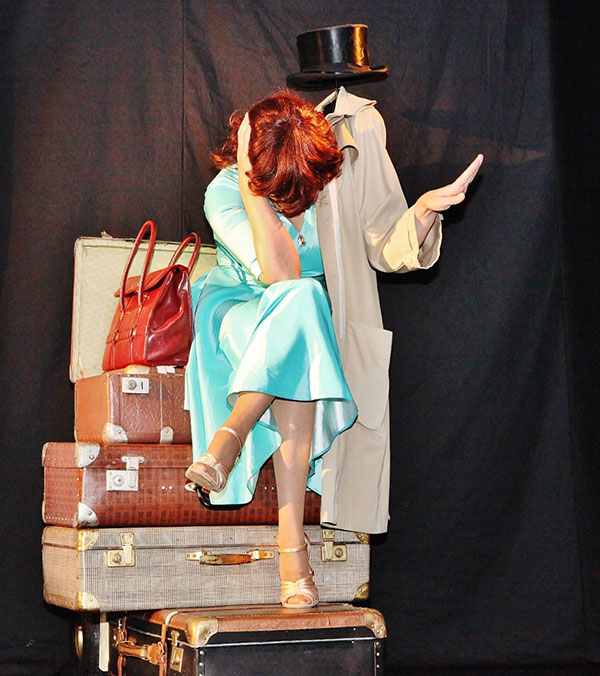 Stefan Plachkov explains that "physical comedy" used by Charlie Chaplin is merged into the Comedy Physical Theater "La Comedia". He emphasizes that the audience is entertained and actively involved in the performance, which is a mix of music, dance, musical cinema, pantomime, circus numbers, sophisticated acrobatics and comedy del art. The La Comedia performance can be seen on the stage of the New Theater NDK on 27, 29 September, 3, 4, 5 and 18 October. It is suitable for the young and the elderly - from 3 to 93 years, with a smile marked by Stefan Plachkov. 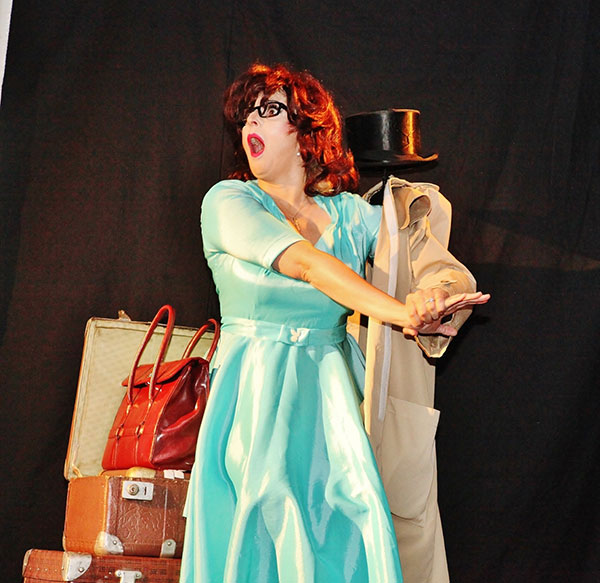 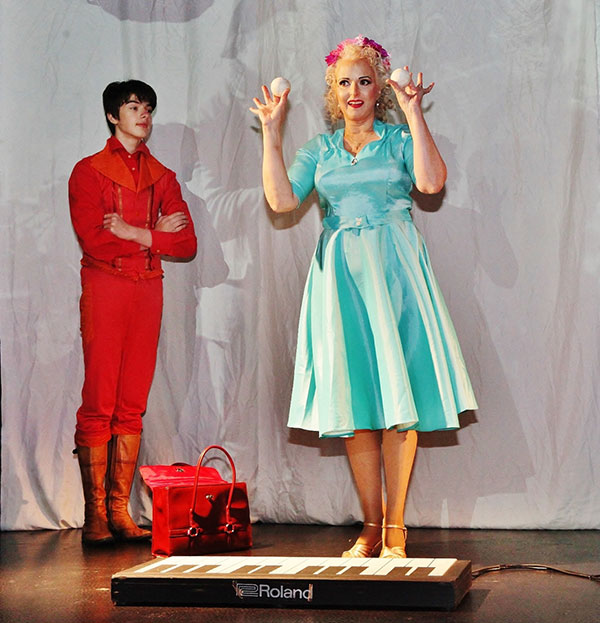 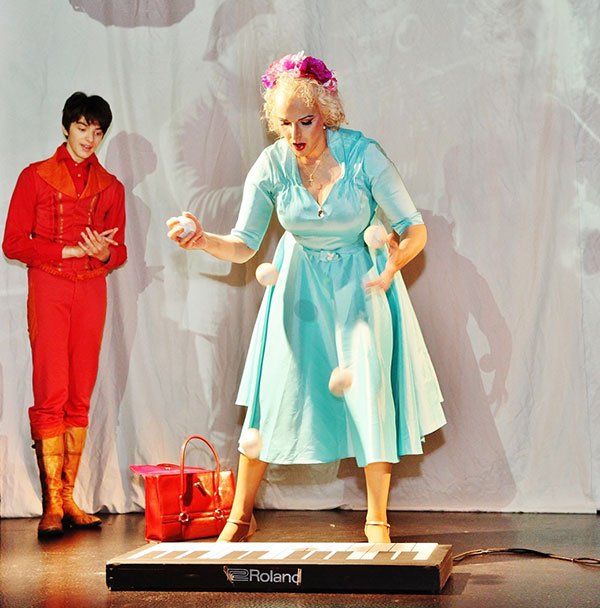 Alina and Stefan Plachkov have been performing for years on some of the biggest theater and circus scenes in more than 50 countries around the world. Their joint personal and professional life began shortly after Stephen's personal meeting with Pope John Paul II, who blessed him after watching a performance by Circus Balkanski. Alina Plachkova is of French-Belgian origin.

She was born in Denmark in the family of the seventh generation of artists. She received her education at the Royal Ballet and the Music Academy. She has won a gold medal at the Circus International Circus in Paris - The Circus of the Future, as well as the Circus festivals in Rome and Berlin. 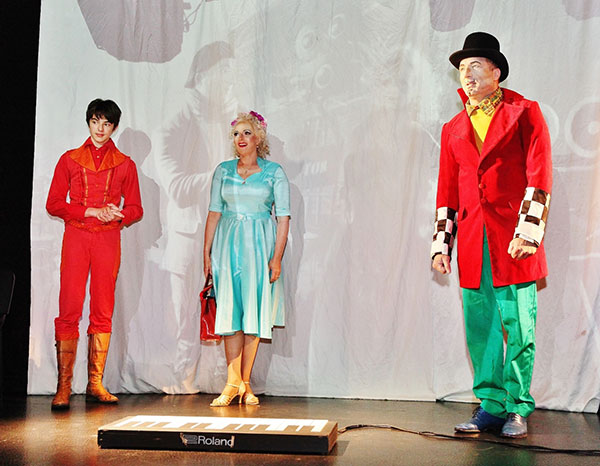 Alina is a professional artist in the field of musical juggling and acrobatic ballet. Among the scenes that are presented are "Lido", "Moulin Rouge", "Foli Berger". Stefan Plachkov was born in Bulgaria. He graduated the famous circus school in Moscow with a diploma personally from Yuri Nikulin. He has worked with Circus Balkanski and Cirque de Soleil. He participated as a consultant in the Tony Award for the Broadway high-budget musical Pippin (2015). Stefan Platschkov is a professional juggling artist, free balancing on the ladder, rotation of cubes and comedy. Presents in prestigious festivals in Rome, Paris, Berlin. 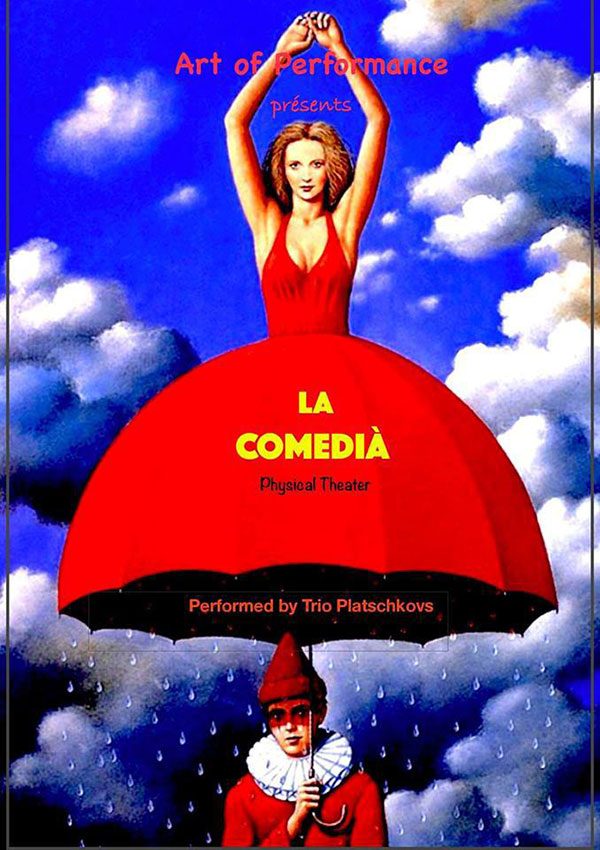 The young designer will show the Fashion Melody collection at the fashion weeks in Sofia and Athens The young designer Dilyana Mateeva presented her fashion collection Autumn-Winter Fashion Melody 2018/2019 during a press conference at the Press Club BTA. Petya Djukelova, a professor at the National Academy of Arts, designer-modeling and technology consultant of the collection, also participated in the press conference. Host was Prof. Lubomir Stoykov - President of the Academy of Fashion and professor at the National Academy of Arts. For the first time, the designer showed models from her Fashion Melody collection. The show included Miss Bulgaria 2015 – Marina Voykova, Katerina Sucugena and Ivena Zagorska.

At the very beginning, Prof. Lubomir Stoykov presented Dilyana Mateeva, noting that she "embodies the new generation of young designers who have experience as well as artists." "It seems to me that Dilyana devotes a lot of attention to the detail and has a precise look at the colors. She works interestingly with the materials and the combinations between them, "Prof. Stoykov also said.

During the press conference Dilyana Mateeva announced her upcoming appearances in the fashion weeks in Sofia and Athens, where she will show a whole variety of clothing, also part of the Fashion Melody collection. Her fashion show at Sofia Fashion Week AW 2018, will be on September 18th (Tuesday) during the evening, dedicated to debut designers. Athens Xclusive Designers Week will be held from November 1-4, where Dilyana Mateeva shared that no other Bulgarian designer was present at the moment. In her speech, she presented her Fashion Melody collection, inspired by the feminine elegance in rock and more specifically by the lyrical heroines in rock songs from the late 1980s and early 1990s.

Dilyana Mateeva focuses on the hand-made paintings in pop art style. In her author's drawings, the images of female faces, as well as the feather - a symbol of creativity, composition of music, as well as a reference to the feathers played by rock guitarists.

Petya Djukelova said she was captivated by the drawings of Dilyana Mateeva, who have revealed a clean and meticulous design, with no aggravation and surplus details. "I was then impressed by the fact that Dilyana strictly adhered to her original ideas and the colors of the sketches. He traveled a lot to Paris, Milan, Romania and all over Bulgaria to find the right materials and fabrics without compromising. "Petya Djukelova also emphasizes the provocative and bold combination of fabrics such as cashmere (up to 1 cm thick) and crystal silk.

The Fashion Melody Autumn-Winter Collection 2018/2019 combines practicality and elegance with rebellion and adherence. The clear silhouettes and the feminine line of clothing are combined with specific elements in patterns and interesting combinations of colors and fabrics. Dilyana Mateeva relies on silk, velvet, eco leather, wool, gabardine, cashmere - fabrics that give femininity, class, but emit slight disobedience and freedom. The colors are blue, red, pale pink, white, black, golden beige, body and camel color, as well as specific shades of green and purple with woven brown threads.

A total of 12 selected outfits from the collection were presented in the review during the press conference - three coats, three suits, three dresses and three T-shirts with original paintings combined with skirts and skirt. The silhouette of the coat and coat in the collection has an underlined waist. In the coat, the designer combines two silhouettes into one - combined cloak and straight silhouette, as well as A-silhouette cloak. The coats are made of cashmere and wool, embossed alpaca with wool (hungaro fabric), gabardine and cold-pressed wool, and the coat of linen and silk.

The costumes include a classic jacket and sleeveless jacket combined with high waist pants and a clean straight line. The accent in the back of the jacket is the motifs with female faces of handmade embroidery with 3D elements. An interesting solution in the design of one of the coats is the soldier's collar, highlighted by stylish green pants. In some pants, the accent in the cut is a short front that elegantly emphasizes the ankle.

The paintings of feathers made with watercolor technique in the front give elegance to the dresses made of white gabardine and cold-pressed wool. The colors of the images are in the typical pop colors - blue, red, yellow and green. In one of the dresses feathers are also present as a detail on the scarf-collar, which effectively highlights the V-shaped back. Another dress is a balloon silhouette that highlights the hips, while transparent black crystalline silk is shaped into a spectacular bouffant sleeve.

Some of the skirts are multilayered with slits or draping. The collection also features a non-standard interpretation of pants and hand-painted T-shirts in pop art style. The female faces are key to the design of the three T-shirts in the collection made of Cotton Tunic "Punto Milano" in ecru color. The paintings depict the feminine emotions raging as tsunamis, spilling feelings, love, passion and restless thoughts.

Details that stand out in the collection are handcrafted buttons, dressed in the respective fabric of the garment, as well as the buckles made using the "lace freaks" technique. Emphasis is also on the designer hats made of rabbit felt, which the designer Dilyana Mateeva shared she will present at Sofia Fashion Week AW 2018. The collection includes a black bomber and hoods with wide periphery in white and blue with accent - discreet red band at the base. Another wide-brimmed hat depicts a red-dial clock and red feathers. The black bomb is inspired by the solo guitarist of Guns N 'Roses - Slash. In its typical style, the bomber is high with sewn elements at the base. From the accessories, the designer has also staked on crepe silk scarves, which also have the author's images of female faces.

Dilyana Mateeva graduated in 2016 from the National Academy of Arts, specializing in Fashion and Fine Arts at the Sofia University "St. Kliment Ohridski "in Bachelor degree in 2013.

She presented her designer works at the invitation of Prof. Lubomir Stoykov during the events of the Academy of Fashion - BG Fashion Icon 2016 and Golden Fashion Party 2016 as well as in the framework of Sofia Fashion Week fall-winter 2016-2017. He admired the elegant, clean and memorable style Christian Dior and Yves Saint Laurent, as well as contemporary designer Roksanda Ilinčić. She has worked as an assistant to the famous photographer of "Vogue" (Italy) - Omi Chowdhury. Together with him, she shot a photo session of the designer Irini Andrikopoulou for Vogue (Italy) and a photo session of the Golden Needle winner - Svetoslav Kolchagov, for the magazine "Deux magazine", where the young designer has published several articles.