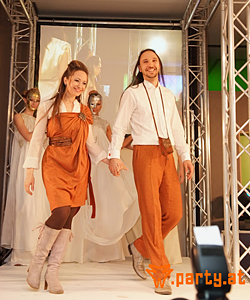 Fashion critics talk about Bulgaria with respect because of the creative designer tandem Bipone.

Biliyana and Petar Pelovi won first prize at the competition STYLES FASHION AWARD 2010 due to their unique style. They gave special interview for the readers of Fashion Lifestyle Magazine.

The successful duo took part in the prestigious fashion event with three models made particularly for it. The jury estimate designers according to their creativity, workmanship, color composition, original idea and quality of used fabrics. Bipone were inspired for their collection by the elegance and the grace of mythical Roman goddesses. The Pelovi tandem said they hope to come and present their models in Bulgaria soon.