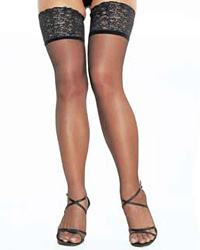 Nylon socks are one of the most important things in the lady`s wardrobe. They are found before seventy years. Before this revolutionary invention women used to wear socks made from wool or silk.

Nylon was patented in 1937. Then in 1939, Dupont developed the fiber and demonstrated nylon socks at the 1939 New York World's Fair. Dupont also built the first full scale nylon plant in Seaford, Delaware in 1939. Production began later in the same year. During the very first year in production, 64 million pairs of nylon stockings were sold to consumers. Stockings were first sold to the public in May of 1940. Four million pairs were sold in four days.

Picture:
1. Nylon socks are one of the most feminine parts of the women`s apparel.

MORE PUBLICATIONS:   ISSUE 17: THE “VICTORY&ALBERT” MUSEUM – THE TREASURE HOUSE OF THE WORLD ART   ISSUE 15: „BATA” – HISTORY OF THE SHOE   ISSUE 14: JAPANESE LEGEND FOR THE COSTUME   ISSUE 13: THE GALIERA MUSEUM IN PARIS   ISSUE 12: The Metropolitan museum – the defender of the fashion trends
﻿