Invisible material?! The mission is possible

There is nobody who didn’t wish to be invisible at least once. So, in the century of the technological challenges we won’t surprise you if we tell you that very soon your dream will come true. Scientists provoke the imagination – they create new materials, changing the way the light or other forms of illumination interact with the human body. And yes – they can make objects invisible, affirm the scientists.

Two independent teams are quite close to the creation of experimental Meta material that can enfold one object and to hide it from the visible, infra-red light, and even from the sound-waves. Thanks to these successful experiments it’s found that the science fiction novels for invisible mantles are not at all “terra incognita” for the contemporary science. Prof. John Pendry from “Imperial College” in London says that it is not so far away the time when the invisible materials will be a real fact, but not only a laboratory product. “If we succeed to find an adequate financing, after five years the invisible materials will go out from the clean territory, says he. The professor explains that from this material can be build for example a shelter – even if you drive a tank there or you organize a party, everything that is happening inside will be invisible for the people outside.

The key to the property “invisibility” is the so-called “meta material” – a material with an exotic composition, received through the use of a nanotechnology that can change the direction of the electromagnetic radiation. The light waves will “float” round an object, hidden under this material in such way the water does it round a smooth rock, i.e. this is the optical effect. The material not just blockades the light or removes its reflection as in the traditional technologies for hiding objects. The specification is that from whatever angle the object, wrapped from the material, is seen, it looks like it disappeared.

The Meta materials are composite structures that don’t look like nothing created by the nature. They possess unusual qualities, like for example to “play” with the light in unusual way. 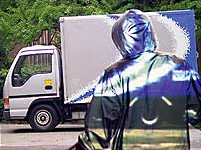 The scientists explain the effect of the invisibility in the following way: “Think of the space like of a knitted cloth. Imagine that you make a hole in the cloth as you put into it sharp-pointed object between the fibers without tearing them. The light or the waves will travel between the fibers and will stop behind the object without touching it”.

One thing is clear – you need a material with the right qualities and you can learn how to manage the light. The question is if this achievement will be used for peace aims or this will be the consecutive instrument for self-destruction of the people.

MORE PUBLICATIONS:   ISSUE 12: THE ROAD OF THE SILK = THE ROAD OF THE HISTORY   ISSUE 11: KING COTTON OR THE LEADERSHIP OF ONE MATERIAL   ISSUE 6: Care for clothes   ISSUE 4: ORGANZA AND ORGANDY – FIND THE DIFFERENCE
﻿