THE NEO METAL – RAP, METAL OR JUST ONE KILLING COMBINATION

Honestly speaking, a long time I didn’t know, that many of the bands, that I really like play in fact neo metal. And this is because of the simple reason, that the neo metal was born quite later than the rest of the music styles, but quite quickly it develops and attracts the attention of the representatives of different subcultures. Metals, rappers, rockers, hippies, skaters – to the most of them the neo metal sonority is liked, because the neo metal combines in itself many aspects from the different music styles.

The neo metal, before popular like “rap metal”, starts his furious invasion at the end of 90th, when many groups starts in large number to appear, playing such kind of music. The neo metal is founded very often under the names crossover, new metal and agro metal. In the beginning of the neo metal wave, bands like Rage Against The Machine, Anthrax, Body Count etc, gave their contribution. Some define the neo metal like a wave, others like a style. Personally for me it is a style, because it doesn’t exist such kind of music. At the same time it can’t be a wave, because the neo metal doesn’t disappear during the years, as some others movements, but the neo metal stayed and even it develops with big power. The neo metal forms like music genre in the middle of 90th. In the neo metal are weaved many tendencies from the grunge, the rap, the alternative, the electric music, as many others metal sonority (from trash to groove).

Among the most popular bands in the history of neo metal are Korn and Deftones. They start the neo metal presence on the world music scene, and after them come some more and also good bands like Limp Biscuit, Linkin Park, Coal Chamber, Slipknot. The low attuned guitars, played some remembering accords, often without solos, including the weaving of samples, scratches and rap influenced vocals, are found to be successive combination.

Often the neo metal is considered like modern metal, a mixture from many types cultures and sonorities. But most often the neo metal bands are influenced by the hip-hop culture. The taken off jeans, the sneakers and the haircuts – all of them prove this. The subculture of neo metal is an endless field for investigation, because in it exists many themes to examine – from the hair cut to the clothes. Other neo metal bands in generally don’t respond to these criteria, but however they define them selves like neo metal. That is one of the reasons, because of that many music critics reject the neo metal just like a wave of new appeared bands with similar sounding. In Bulgaria the neo metal becomes especially popular around 2000, because at that time a lot of the popular songs start to appear on MTV in a mass, and this is one of the main reasons because of that metal fans hate the neo metal music – the mercantilism. Metal fans hate, even detest all things that are mercantile, that brings money and benefits to the people, who make music. Of course, a lot of metal fans started to listen such kind of bands, but however they didn’t leave the old metal sounding. Just the contrary. They just refreshed them selves with new metal sound and continued forward.

As a whole the Internet society rebels very strongly against the neo metal. For the most admirers of metal, the neo metal doesn’t exist like a style and it is created for spoiled teenagers. To a great extent the neo metal really wants to make money, creating music – mixture from many styles, namely aiming to win the young people and to motivate them to buy the albums of the most popular bands. But however, we can’t ignore the fact, that this is one new movement, that during the years (however few they are) gained some experience and evidently, it is enjoyed at big interest from the side of the audience. In Internet exist many forums, where true admirers of metal try to „bring mind” in the heads of those who don’t understand. It happens often even to arrive to curses and bad words. 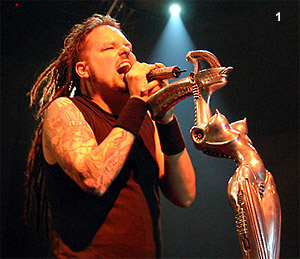 Really, when is it speaking of Korn, we can make a bow. Korn is the band that turned the notions for music of one whole generation. They are those, with whom my generation grew up, while we got to know the world. With their dark and wild texts Korn drive crazy their young admirers. The vocal of the band Jonathan Davis often touches to very unpleasant themes like raping and violence over kids and the managing with the anger to exceptionally authentic and sarcastic way, to the greatest part influenced by his own worldly life. 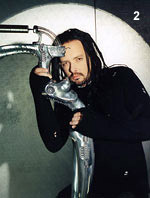 When Korn go to the scene in Mexico City, to present a material from their coming album that came on CD under the name Untouchables at 11 of June from Epic, a killing, but yet useful fatal woman accompany them. The front man, Jonathan Davis set a task to the legendary Swiss H. R. Giger, the creator of psycho-erotic monsters from the great movies Alien, Alien III, Species, to project one masterpiece of art. Giger creates biomechanical stand for microphone, projected in the form of one seducing serpent extraterrestrial. In the foundry in Zurich are molded only five stands from cast that after those were destroyed, adding to their history brilliance and value. Jonathan receives two of them and a proposal to receive third, if it will be necessary or if he decides to bring it in a museum at his choice. The other two statues are a possession of Giger, one of them is defined to be among the constant exhibition in the museum of Giger in Switzerland, and the other to be used for exhibitions in his gallery. They are showed also in Revolver and Maxim. “It’s great,” says Jonathan. ”I always liked the dark, mean side of the mechanical things, that Giger makes, but later I recognized also the erotic side of his art. In fact, I have some of his works of art at home, so I am glad, that he makes something for me.” 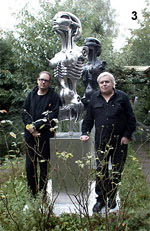 The history stand for microphone appeared after the visit of Giger in Switzerland. “It was at the time of one trip”, says Jonathan,” He leaded me at his home and we sited and talk all night long. I asked him to create one functional work of art. Later he sent to me a pile of drawings and I approved that really sexy, mean, mechanical Creature.” Molded from metal, projected from Giger it presents an extraterrestrial, over sexual female creature with the microphone of Jonathan on the head of the monster. 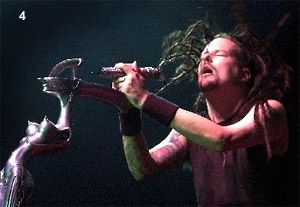 So Korn came in Bulgaria at 8th of September 2005. It was a shaking concert, who set on fire over 6 000 of fans. Jonathan Davis and company were in their whirl and they won for one more time the hearts of their thousands of fans. Festivalna Hall was full to the limit, and the fans were excited and they sing the songs from the beginning to the end.

The character sounds of the bagpipe can be recognized in all the albums of the band. Davis it self plays solos at bagpipe at his concerts, properly dressed in Scottish skirt and in long hoses with tassels.

In order to his clearly music strangeness, the leader of the band is popular also with his passion of collector of different substandard exhibits. He buys the car of famous serial killer from 70th, pushed by his desire to make his own museum of the serial killings. Besides, the front man possesses an impressive collection of bagpipes, and also a collection with different things of Elvis Presley.

Linkin Park like a continuation of the era Korn ...

Here is one band that in many aspects distinguishes from Korn, but it is also defined like neo metal. There the sounding is quite different – there aren’t the curved solos of Jonathan Davis, there isn’t the sounding that can drive crazy every teenager. Linkin Park are quite more soft like sound and they are listenable easily. And for Linkin Park also exists the relation between metal and rap music. And the teenagers are crazy about their works. Songs like “In the end”, “Crawling” and “One step closer” become favorites for the young admirers. The way of dressing is copying with full power – taken off trousers, bizarre hair cuts in different colors, dark glasses, sketchers etc. 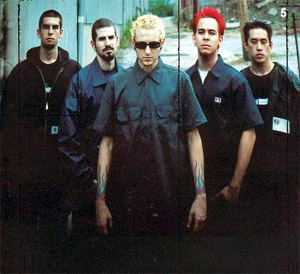 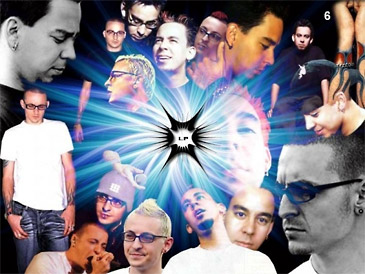 Tendencies in the clothes and in the hair cuts of the neo metals ...

As a whole the neo metals don’t have strict defined way of clothing and hair cut. The most of the representatives of the neo metal subculture are with taken off trousers (taken from the rap), with curls (a type of Rasta), with sketchers (a type of hip-hop), with earrings and prongs (taken by the metal). This combination gives some notion about that how looks a representative of the neo metal subculture, although this determination is quite relatively, because the neo metals bring different clothes and haircuts. On the whole, looking at the members of the neo metal bands, man acquires most general notion what kind of clothes and haircuts would prefer the admirers of this music style.

Music style, wave or just tendency in music is the neo metal? For me, the neo metal is tendency bound by many music movements – to be interesting, to make money and to be the modern music style. But however, the neo metal is and stays one killing combination, which doesn’t bear compromises from the young admirers. Even on the contrary – it does its best to be number one in their charts and to win unequivalent battles with the other music styles...