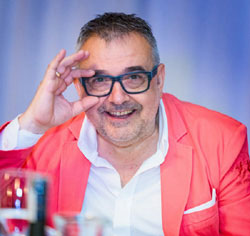 I do not agree! If we say those sacred words more often, we will be more useful, we can gain a better reputation or, at the very least, inspire more respect. But there are many other important things that disagreeing gifts us like: improving our existence, overcoming the ugly, nasty, and fake things in our lives...

Centuries of bright minds of humanity have pushed civilization forward with its discoveries, inventions, scientific tests and experiments. Each of these scholars had to respond to a basic question: whether to accept uncritically all that his predecessors had discovered and proved before him, or to rethink the basic and well-established ones and definitions so far? What is the benefit of disagreement in the scientific and creative process? Should everything from what has been done so far be rejected, destroyed and eliminated? What examples can we give to scientists who have not hesitated to break up with obsolete theories and rethink traditional views? How to solve the dilemma of tradition - innovation?

It is enough to look at the spiritual connection and continuity between Socrates, Plato and Aristotle in antiquity, or between Freud, Jung, and Adler in more recent times to understand that the best disciples of their teachers are those scientists who perceive the best of the theories of their mentors, but do not hesitate to overgrow, correct or partially reject them. Why is this so? Because there is a universal dialectic - everything evolves, changes, enriches. Traditions and classical knowledge are very important, but no less important are new views, new principles forged in the process of active mental and intellectual activity.

In order to make the role of disagreement more conspicuous in human knowledge, it must be brought to mind that, in both the natural-mathematical and the humanist branches of knowledge, the discoveries are of a relative nature. Yes, it is true that they - each for their time are of revolutionary importance for the development and advancement of science. But it is also true that their point is to pave the way for scientific and life truth and to justify new discoveries. This relativity of human knowledge and progress is predetermined by the different stages of evolution as well as by certain technological constraints.

Among the most discerning discoverers and scientific revolutionaries, one can mention the Bulgarian John Atanasoff, who is the father of the modern computer, his genius inheritor Bill Gates, who is the most successful American programmer and co-founder of Microsoft, Nobel Laureates Watson and Crick, created and discovered the double-stranded spiral pattern of DNA structure. All of them, in one way or another, have been disagreeing and disobedient, trying to retreat and prove their claims to succeed in their scientific and inventive attempts. At least one other circumstance must be highlighted when looking at the parameters of scientific, creative disagreement. This is the critical attitude, the opposition mood, which inevitably has scientists, journalists, innovators and inventors. The origin of the very word "critique" leads to the verb "appreciate". In other words in order to be critical of a method, approach, statement or theory, a serious, in-depth and representative analysis of the relevant facts and phenomena must be made. Criticism is not only a negative denial, or a superficial disagreement. She is a true sister of competence and an indispensable assistant in all scientific and professional activities. Without criticism there is no life, no development, no evolution!

The ability to doubt is inherent in brave, original and innovative people. In any case, the statement, "Doubt in everything," should not be universally popularized, because then we will give an unforgettable chance to the triumph. In other words - doubt when things look too good to be true; Doubt when the intuition has screamed in your soul; doubt when you see the barriers to freedom, truth, goodness, beauty, progress, and life.

Disagreement is a herb and a vitamin in human progress, in the dynamics of human civilization. Disagreement requires an initial suspicion of the obvious, because things are not always what they look like. Disagreement is impossible without the courage, at any cost, to get to the truth - and without sacrificing prejudice. Disagreement is that remarkable feature in the character of any reliable scientist, creator, writer and speaking journalist, and the most ordinary citizen without whom he cannot be of maximum benefit to life and society. Therefore, do not rush to agree with everyone and everything. Understand the obvious in doubt and you will go far! ...