THE SUBCULTURE OF THE SHOCK ROCK – ONE SHOCKING THERAPY

The shock rock is a phenomenon that during the last decades changed the world and the notion for rock. The eccentricity is the key word that to a biggest degree characterizes the shock rock. Make-up, behavior, music – all of these elements exist to a great many and in possible the most shocking appearance. The shock rock is not only a music genre, but also a tendency that during the years develops at top speed and everyone representative develops it in his own way.

Characteristics and origins of the shock rock...

The shock rock is a notion with a wide range concerning music bands that combine in their performances rock and borrows elements from the theatrical art to create the messages that they will present at the audience. At first the shock rock appears as a genre with a vague conception in the beginning of the 70s that refers to the music epoch of the glam rock.
In the 60s Jay Hawkins and Arthur Brown are one of the pioneers of the shock rock. The early 70s are an introduction of the story, telling of the great shock rock performers. Texts of songs, devoted to the Devil and to the occult are a trade mark for bands like Black Sabbath. Ozzy Osbourne contributes to the glory of the rock and roll, eating the head of a bat right at the stage. This action transforms him in a rock God for his fans and disgusts the rest of the world. Alice Cooper uses an imitation of violence at the stage. With the means of the shock rock act the unique KISS, whose vocal Gene Simmons throw up blood and fire during their concerts. The shocking theatre gives green light for developing also to bands like Iggy Pop and Sex Pistols. 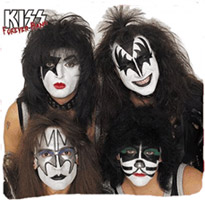 When it is speaking of shock rock in my conscience click back three words, with which I could characterize this kind of subculture. And namely – make-up, scandal, КISS. Maybe this is before of the simple reason that I was many years ago a representative of this subculture. Of course, big names in shock rock are not only KISS, but also the eccentric performers Alice Cooper, Ozzy Osbourne, Marilyn Manson.

The image of every one representative of the shock rock tendency is first of all „shocking”. What do I mean? From head to foot the shock rock musician is in scenic costume, enormous shoes at exclusively big platforms, and also he is decorated with „tons” of decorative cosmetics. The behavior of the shock rocker is more than remembering – throwing up of blood and of fire during concerts, imitation of violence and many others „shocking” the eye experiences.

The fans of shock rock are no way inferior at extravagance to their idols. Even in their trivial round they copy their music idols – t-shirts with the faces of cult shock rock heroes, a make-up sometimes more than it’s necessary, long hair, effect boots and of course the constant leather trousers.

Today however, the representatives of the shock rock subculture are mostly interested in three directions. They bow down before KISS, Marilyn Manson, Alice Cooper and not at last place – they bow down before Ozzy Osbourne. This is so „thanks” to the fact that many of the young people wave mostly to the more popular bands of today and because the shock rock performers in the last years don’t have cult records to surprise, the youth direct to others, more popular subculture tendencies.

In the last years it is observed one transformation and it is related with the many concerts that had place in Bulgaria. Except Sofia where many famous bands rest unforgettable memories in the hearts of thousand of fans, Kavana became the face of the metal performances in our country. There had place many concerts of cult bands and they continue to have place.

The representatives of the shock rock subculture take proper place in Internet. In thousand sites and bloggs the names of cult bands are presented, who shacked the Bulgaria scene and it is imminent to shake it. In the commentaries under the articles is felt the excitement in the hearts of the fans, who with so much love share their hopes of the coming performances, to whom they will become witnesses. Internet is dappled with colorful photo material of already playing or imminent to play shock rock performers. Here are the giants: 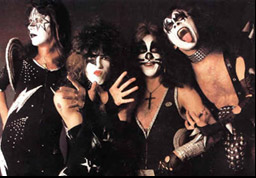 For KISS tons of paper could be written, because they are maybe the band with the richest past of all of the shock rock bands. KISS overcame the temporal boundaries and even today they look remarkably for their age.

The American shock rock band KISS was founded in 1973 in New York. Then they start their performances with the songs they play today to create their impressing show. They use the effects of the fire and of the blood, threw up from their mouths, as with many pyrotechnical effects. Gene Simmons, Paul Stanley, Ace Frehley and Peter Criss are extremely remarkable with their scenic presence. They are identifying with the heroes of the comic strips: Gene Simmons is the Devil, because he defines him self as a cynic and his soul is filled with darkness; Paul Stanley is the star child, because he considers him self as the lover with stars in his eyes and as a hopeless romantic. Ace Frehley bases his arguments on his self feeling for a man from other planet and on his wish to make a trip in the cosmos. Peter Criss is in the role of the man-cat, because he is famous with the fact that he has as nine lifes, bearing in mind his turbulent past in Brookline. 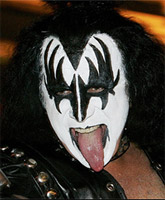 KISS is not a band from yesterday and for them are imminent many others horizons. The long awaited concert in Bulgaria this month is a prize for many fans, whom patience is already almost snapped.

In the next three weeks for the great for many fans moment at stadium „Academik” the tension yet will increase, until it reaches its apogee at 16th of May, when Sofia will be shacked from the sound of the everlasting shock rock performers.

Another notable representative of the shock rock epoch from the old generation is the staying young Alice Cooper. He is called “the godfather” of the phenomenon shock rock. He uses guillotines, electric chairs, he imitates blood performances and he uses boas at the scene. Cooper experiments with many kind of rock, until he stops at the losing breath phenomenon shock rock. The biography of this great artist is very long and I don’t think to relate it because for every one world musician is more important what kind of emotions he provokes at the people and with what he will stay forever in the souls and in the hearts of his fans. Alice Cooper is not only a great shock rock performer but also an actor and a popular radio DJ. He unifies the show business and the rock in a way that is unseen till now. The legend for Alice Cooper is alive and will continue to live, independently how many years will pass.

Qualified as a godfather of the heavy metal, in the personality of Ozzy exists a combination of many styles and for that reason I couldn’t miss it, writing about the shock rock. Image, detachment, style, way of life – all in his personality is cult and unattainable. It is interesting how hardly is to write about the greatest performers in some tendency – because of the simple reason that so many words are said for them that all that is written today sounds like a cliché. Ozzy is the vocal of the band Black Sabbath that during the years goes through many modifications but the face of this band is and always will be the legendary Ozzy. 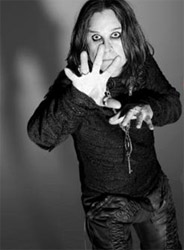 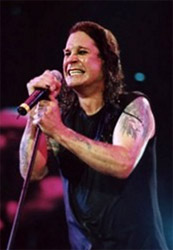 For the fans he is an idol but it’s not like that for the parents of his idols. He is accused in preaching of Satan ideas, as in that way he influences negatively on the child conscience. However Ozzy says that through his show at the scene he doesn’t seek of it, but it’s just a kind of entertainment that is interpreted in bad manner from the people.

According to Ozzy the teenage rebel against the world has to be pacified in some way and the music is maybe one of the best and peaceful manners of happening to this. 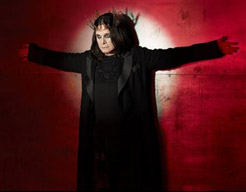 The feeling to be close to such a great artist is amazing. I had the pleasure to be present at a concert of Black Sabbath in 2005. And really – that what I was seeing at the videos of Ozzy in the reality also was happening. He also so energetically gives him self to the audience at the stage as on the TV. The show that Ozzy creates is so incredible that only the direct spectator can feel it. Ozzy could be added to the old school shock rock whose live performances are a proof for his perfectionism.

Marilyn Manson:„...If I appear at the stage without make-up, it’s the same like if I appear on slippers... 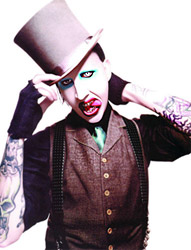 When it is speaking of Marilyn Manson everyone holds his breath. And it’s not without a reason. In fact the name of the eccentric is Brian Warner, and his stage-name is a combination of the names of the legendary Marilyn Monroe and one of the most traced serial killers in the world Charles Manson. Marilyn Manson is added as to the industrial, as also to the shock rock phenomenon.

The performer from the newest generation of the shock rock makes incredible concerts – he imitates sexual scenes during his performances, he borrows a lot of things from the theatrical art, to reproduce his ideas. At his concert in Sofia he didn’t pass his trade mark and he was amazing more than ever.

A key figure in the shock rock, Marilyn Manson is qualified by the media with a lot of definitions – a vampire, a bloodsucker, a zombie, a cannibal. But he is just one original performer who doesn’t scare to reveal him self, even just on the contrary – he shows the darkest sides of his conscience. And namely because of this reason he is as so hated, as so loved.

I conclusion I could say that the shock rock dimensions of today are not so effective, as they were in the past, but in spite of all it exists and the quality shock rock performer is always distinguished. The subculture of the shock rock brings a little nostalgia and romance to the past time, when the rock and the metal were real and untainted by the commercialism of today. The values of the shock rock from the past today are broken through the prism of the market, and the theatrical attributes, the make-up, the pyrotechnical effects and the accessories of the performers today are changed into an instrument of better marketability of the shock rock bands. And this is one of the instruments, thanks to whom this kind of music is listened. Let there be rock!... 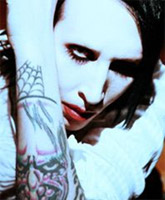 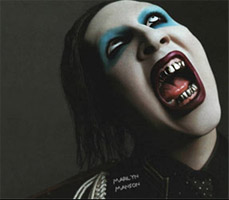 MORE PUBLICATIONS:   ISSUE 8: GRAFFITI SUBCULTURE – AN ART THAT DOESN’T HAVE AN ANALOGY   ISSUE 6: THE PREDETERMINED SATAN IN THE FACE OF THE BLACK METAL SUBCULTURE   ISSUE 5: THE NEO METAL – RAP, METAL OR JUST ONE KILLING COMBINATION   ISSUE 4: HARDCORE SUBCULTURE – SALVATION FROM THE REALITY OR REALITY IN THE SALVATION   ISSUE 4: Young and Clean – Straight Edge Subculture
﻿