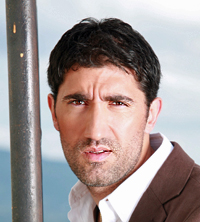 Bulgarian actor Bashar Rahal has accepted the invitation to play in the TV series 24. The talented Bulgarian will play the role of General Uassim who conspires against President hassan (played by Anil Kapoor, Slumdog millionaire). Raal will be a guest star in the fifth and eight parts of the most prestigious US TV series.

This role is another success for Rahal. In 2008 he took part in Whiteout of the director Dominick Sena (Gone for Sixty seconds, Swordfish) together with Kate Beckinsale (The Aviator, Pearl Harbour, Underworld, Van Helsing) with a budget of 45 millions of dollars. He has also took part in the movie „Repossesion Mambo“ with Jude Law (Cold Mountain, A.I., The talented Mr. Ripley) and Forrest Whitaker (The last king of Scotland, Panic room).